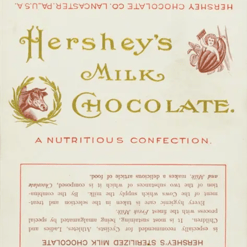 Most people remember Milton Hershey for building the iconic Hershey Company and for good reason. The largest chocolate company in the world, those of us who grew up in America instantly think of Hershey when talking about chocolate bars. What is less commonly known, though, is the role Milton Hershey played in the development of the manufacturing process. Throughout his career, Milton Hershey sought and invented numerous manufacturing innovations that made production and distribution far more efficient. This enabled the Hershey Company to go from a local company to a multinational behemoth.

The Hershey Corporation was not Milton Hershey’s first big business. During the 1880s through the first half of the 1890s, Hershey found and ran the Lancaster Caramel Company. Using a unique caramel recipe, the company grew rapidly. During its height, the caramel company employed over 1,300 workers. Nevertheless, Hershey’s true passion lay elsewhere. After learning about the chocolate-making process at the World Columbian Exposition in Chicago, Hershey sold his caramel company for $1 million. He then used the funds from this sale to buy land outside of Lancaster, Pennsylvania and got to work constructing a chocolate company.

As might be expected by the name, milk is a key ingredient in making milk chocolate. Not any milk will do, though. Milk with high fat content is more prone to spoilage than low-fat milk. At the time, European chocolate was made with powdered milk to avoid spoilage. However, Milton Hershey was dead set on using fresh milk from local cattle. This made his path to product formulation a lot more challenging.

To solve this dilemma, Hershey replaced his Lancaster-bought Jersey cow for Holstein cattle, who produce less fatty milk. This lower level of fat made the milk slower to spoil.  Additionally, after much experimenting, Hershey found that he could increase the lifespan of his chocolate by slightly souring the milk. Souring milk produces a chemical known as butyric acid. This butyric acid makes the milk last longer, meaning spoilage would no longer be as big of an issue. Butyric acid also is what gives Hershey it’s distinct tanginess that most Americans grew up loving (Europeans, though, tend not to be big fans of this distinct taste). With a product that made Hershey proud, he was ready to hit the market.

Just as vital to having a great product, the Hershey corporation also revolutionized the milk chocolate production process. Rather than use powdered milk, which was common in European chocolates, Hershey Corp heated milk and sugar together. This sweetened condensed milk would smoothly move through the production facility, where other ingredients like cocoa powder and butter would be added. This smooth moving made the chocolate much easier to mass produce. This, along with a great marketing campaign, contributed immensely to Hershey’s early success.

As Hershey emerged as a mega food corporation, it found itself with a bitter competitor. Join us next time, as we see how a mutual partnership turned bitter and benefited the American consumer.