Meat Analogues: Taking a Bite Into the Future

As the heat and the fireworks might indicate, summer is back in full swing. While summer offers a variety of fun activities, at Union Kitchen, it’s the barbeques that get us particularly excited. Burgers, hotdogs, chicken, we love it all. This year, though, we propose adding something a little different to your cook out: meat analogues.

In this Union Kitchen guide, we’ll be taking a closer look into the world of meat analogues, the science behind them, and why you should consider giving them a try.

To start out, what exactly are meat analogues? Meat analogues are vegetarian substances that are meant to mimic various attributes of meat. These include taste, texture, flavor, and appearance. Often known for being soy based, meat analogues actually can be made from a variety of sources including: tofu, nuts, seeds, mushrooms, beans, and more. While vegetarian alternatives have existed in various forms for thousands of years, they’ve recently spiked in popularity in Western markets thanks to the rise of meat-analogue brands like Impossible Foods and Beyond Meat.

Many of us have tasted vegetarian alternatives that tasted nothing like the real thing. What makes these newer brands different? The answer lies in new technology. Unlike veggie burgers of the past, food scientists are able to use laboratory technology to better mimic real meat. Beyond taste, the human senses react to the various components of the meat-eating experience. Beef has a specific smell that it gives off on the grill. This instantly recognizable smell generates a response from the brain that wets the appetite for a juicy piece of meat. By better observing these reactions, food scientists were better able to identify and utilize ingredients that recreate these sensations. Scientists working for Impossible Foods, for example, have been able to extract a molecule known as heme, which looks and tastes like blood, from soy plants. This, in turn, gives their meat analogue that red, juicy look and taste that carnivores find so irresistible.

Wondering if you should add meat substitutes as an option to your cook out? We highly encourage it. The demand for substitute meat is growing rapidly. In 2018, the market for meat analogues had an estimated value of $4.34 billion. By 2026, this is expected to nearly double to $8.156 billion. Additionally, those looking to do their part to promote sustainability should take another look. The production of traditional meat from animals takes a lot of resources and produces a significant amount of waste. Comparatively, these meat analogues have a much lower impact on the environment. Food scientists in Israel built a production facility that produces thousands of cell-grown patties a day while using 99 percent less land, 96 percent less fresh water, and emitting 80 percent less greenhouse gasses. It’s highly likely that these types of meat analogues will become significantly more present in diets in the upcoming decades. So remember, the next time you bite into a Beyond Burger, you’re tasting the future.

In this Union Kitchen guide, we discussed the world of meat analogues, and how your business might benefit from including them in your menu. For more helpful and interesting guides like this, check out Union Kitchen Resource Guides. 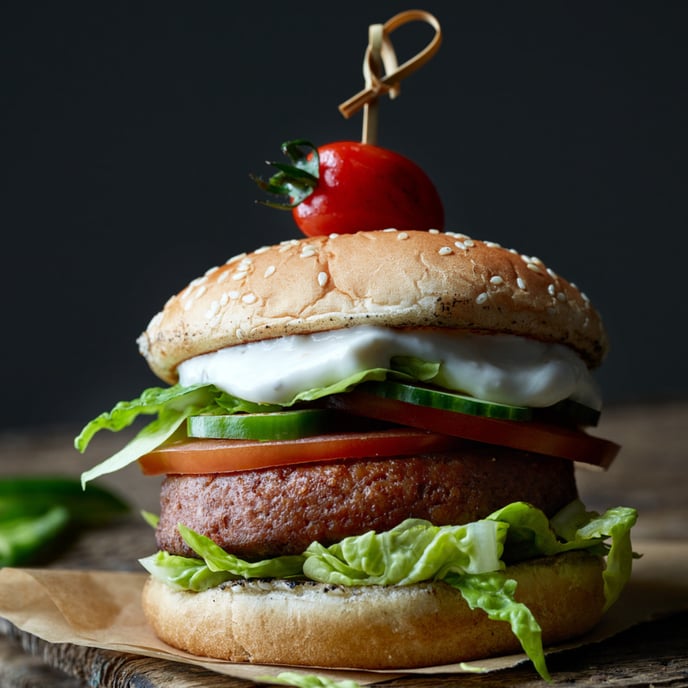